Alan Harper-Smith was born in Delhi, India and was nearly christened Gandhi Harper-Smith! He is now known locally as Alan Wern – a welsh tradition where the Christian name is associated with the house name

In March 2004 Alan was joined by his partner Helen, who had her own local business Llŷn Home and Gardens, which offered a holiday cottage change-overs and gardening service, so quickly fitted into the Wern Fawr environment. Helen gave up her business to be full time at Wern with Alan and they soon had two new arrivals Kaitlyn (Feb-05) and Max (Oct-06), Max was born here at Wern Fawr Manor Farm.

Alan's early education was in various Indian schools, as his parents moved around the country every 3 years. Schooling was varied and included Clifton Elementary School in Darjeeling where he used to visit Sherpa Tenzing Norgay after school – who was one of the first two individuals known to reach the summit of Mount Everest, which he accomplished with Edmund Hillary on 29 May 1953. Alan’s parents Martin & Kay were extremely friendly with Keventer’s Tea plantation owners Bill & Diana in Darjeeling, so he spent a lot of time outdoors playing with their children Jane and Lynn and riding on their pigs. Then it was on to Bombay now Mumbai and Alan has fond memories of swimming,  sailing as well as visiting the then unspoilt Juhu Beach. Then it was time to board in Wychwood prep-school near Meyrick Park in Bournemouth where his grandfather lived at East Avenue. By the way this was the same school that Gerald Durrell of the Durrell’s went to – there is an interesting parallel between Alan’s and the Durrell’s (India, Dulwich etc) – if you are interested have a look at The Durrells. Alan would stay with various people during the Christmas and Easter Holiday’s but would visit his parents in India for the Summer Holidays. Public school again as a boarder was Lindisfarne College in Ruabon  North Wales, where he formed lasting friendships with several of the boys. Christmas and Easter holidays would be spent in Guyancourt, near Versailles in France with his relations Reg & Marjorie and their son Mike. Alan’s parents moved to Kenya, where he would visit them for his Summer Holidays in Nairobi and Mombasa (Diani Beach) again before it was spoilt - staying in rondavels by the beach. His parents then moved on to Ndola in Zambia (previously Rhodesia) and then retired and travelled down to Cape Town to sail back to England retiring in St. Leonards, Ferndown / Ringwood.

Alan left school at 17, joining the Bank of London and South America (BOLSA) in London. He worked for various parts of the bank finally ending up in their computer department. Developing and implementing many systems both in the UK and Overseas (spending 3 years in New York) - he never lost that travel bug. Indeed he also spent his holidays, implementation schedules permitting, in exotic places visiting Australia, Kenya, Mauritius, Hong Kong, Hawaii, New Zealand and closer to home Spain, Greece, Portugal, Corfu, Canary Islands to name but a few - usually taking part in one of his many hobbies, which include scuba diving (in which he became a First Class Diver and National Instructor with the BSAC) and flying small planes by gaining his PPL in 1987 (now lapsed) learning in a Cessna 150 and moving on to Cessna 175 and low wing Rallye's – Alan had a share in a Cessna 175 at Denham Airfield. BOLSA became Lloyds Bank TSB and after 24 years’ service and a great redundancy package he decided to continue as a freelance computer consultant based in London. He has worked for Nationwide Building Society, National Westminster Bank and Global Asset Management. Finally, as he admits the “Rat Race” became too much, so he sold his 5 bedroom London property in West Dulwich (now worth £1.5m), not far from Dulwich College. Whilst looking for rural properties in Rock, Brancaster, Salcombe and Abersoch, he found and fell in love with Wern Fawr Manor Farm, despite not knowing a soul up here or indeed speaking the language, and moved in aged 49 in Feb 97 on a cold and rainy day!

Helen was born in Horforth Leeds a Yorkshire lass had work ethics instilled in her at an early age and worked for her parents Ian and Linda in their Fish and Chip shop, to help fund her passion for horses. She worked for a Barclays Bank (spooky!) and married having two children Laura and Richard, ended up here in the Llŷn. But due to circumstances divorced and ended up with Alan

The property needed a fortune spent on it and still does (it is called a “life style choice”) as we have increase the amount of land around us. However we have found a home to put down our roots. Alan's initial vision was to work towards self-sufficiency hence the chickens, geese, ducks, sheep and bees, in addition to build up a small business to fund his pension and now simple life style, hence the bed & breakfast and holiday cottages. But with Helen’s passion of horses we ate the sheep and now have 3 horses. Our daughter Kaitlyn is loving horses and always keen to go for a ride weather permitting. Unfortunately his mother passed away on the 29th July 2005 – so he has converted her property “The Cottage” or as we call it “Kay’s Cottage” into another self-catering cottage, which was available from 2006 and is proving very popular.

The time, effort and commitment of Alan and Helen are evident throughout, where modern facilities have been combined with traditional elegance. Most of the original features and character remain including huge oak beams, wood panelling and open fireplaces. But they are the first to admit that many of the ideas came from his new friends in the Llŷn Sub-Aqua Club, David (Bach) Jones and Malcolm (Pendre) Roberts to name but two.

Today Wern Fawr Manor Farm welcomes visitors from around the world. Alan, Helen and Richard aim to make Wern Fawr Manor Farm a home from home for guests staying either in one of the holiday cottages or in the manor house for bed and breakfast. Wern offers a warm, friendly and relaxed atmosphere where the owners want you to relax, share and enjoy the fruits of their labour. Although a commercial venture it has lost none of its traditional values that underpin its heritage.

Alan and Helen are also proud that they have put something back into a rural economy, especially in Wales where Alan was educated and Helen holidayed a lot. They are sure that their guests will take total advantage of the local attractions and facilities available in this designated area of outstanding beauty. But as Alan says with a glint in his eye - if you are a diver just bring me back some scallops or crabs or a lobster for him (as his diving days are over) or his aims for self-sufficiency may wither and die! 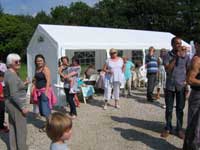 Alan and Helen use to allow the grounds and gardens for seven years to be used by a local charity FOGG (Friends of Grape and Grain) to hold their annual BBQ fund raising event, with all proceeds going to local schools, now disbanded.

Peter Hall with Sir Stanley Peck at a FOGG do!

Alan also hosts and maintains the local community web site which promotes local businesses see www.llanbedrog.info and some of his competitors be it B&B or Self Catering. They firmly believe in buying local when they can and using the best ingredients available. Having purchased 54 acres of woodlands in 2004 they believe they are one of the few carbon neutral businesses in the area.

They will continue to add facilities at Wern, a 6 seater sauna, pool table and table tennis table and some exercise machines have been installed in the Barn and they hope to add more facilities soon. The refurbishment of the Bragdy Wern (Brewery), which sleeps 10, was completed in 2011 and has proved a very popular addition to the existing cottages. This is our fifth luxury cottage, comprising four bedrooms, two bathrooms (one being a wet room), well equipped kitchen including American Fridge/Freezer, gas range cooker, dishwasher, washing machine, tumble dryer etc, large lounge complete with wood burning stove and a conservatory.

“We are looking forward to the next challenges”, they say with infectious grins.

A warm welcome awaits, come and see what you think - you won't be disappointed! 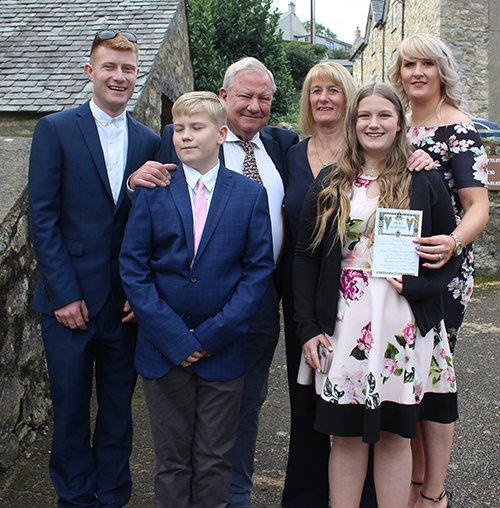 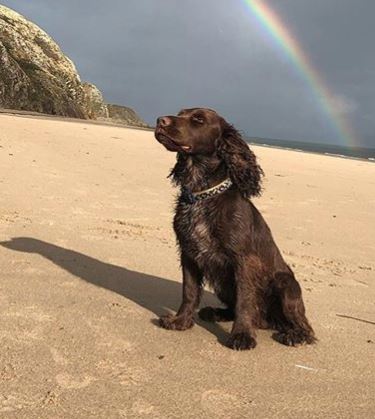 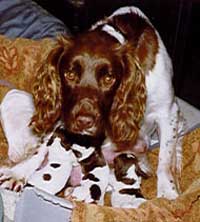 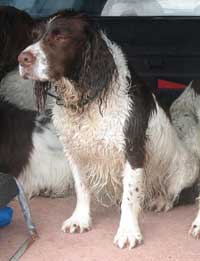 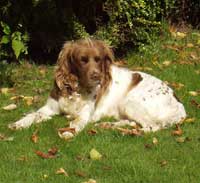 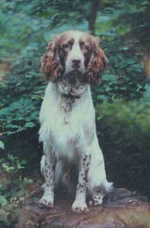 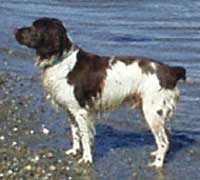 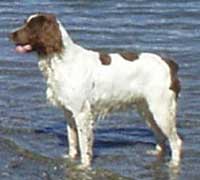